To commemorate the 35th anniversary of an original classic, Disney proudly presents a special 2-movie collection featuring all- time family favorites, THE RESCUERS and THE RESCUERS DOWN UNDER. Join two of the world’s bravest mice — Bernard and Bianca — as they set out on two thrilling rescue missions full of comic adventure while soaring through the Devil’s Bayou and flying sky high in the Australian outback. Buckle up for the ride of your life as these tiny heroes with great big hearts outrun and outwit their rivals to save the day. Brimming with lovable characters and unforgettable music, this 2-movie collection is high-flying fun for the entire family!|The Rescue Aid Society, an international organization of mice with headquarters in the basement of the United Nations building, receives a plea for help from a little orphan girl named Penny who has been kidnapped by an evil woman, Madame Medusa. Medusa intends to use her to retrieve a fabulous diamond, the Devil’s Eye, from a pirate cave. The case is taken by lovely Bianca and Rescue Aid Society custodian Bernard, who becomes her shy assistant. Together, after avoiding two brutish alligators, enlisting the help of the local swamp folk, and turning Medusa and her henchman Snoops against themselves, they rescue Penny and the diamond.|A Mickey Mouse watch can be seen on the wall of the Rescue Aid Society, the international organization of mice headquartered in the basement of New York City’s United Nations.|The film was four years in the making with the combined talents of 250 people, including 40 animators who produced approximately 330,000 drawings; there were 14 sequences with 1,039 separate scenes and 750 backgrounds.|The film was one of the last Disney classics to be animated by members of Walt Disney’s “nine old men,” the affectionate nickname he gave his top artists at the time.|Animation historian/critic John Culhane was the role model for the character Mr. Snoops. According to Culhane, he was visiting the Disney lot when he noticed the animators taking a more-than-usual interest in him! After Walt Disney’s death in 1966 and the release of The Jungle Book (1967), his studio seemed to be sleepwalking, producing films that were beautifully animated but lacked compelling stories. The Rescuers (1977) was a welcome bright spot. The first collaboration between the animators who had been working for Disney since the days of Snow White and a cadre of young artists, the film displays an energy and a charm that had been sorely missing for nearly a decade. Based on a series of children’s books by Margery Sharp, The Rescuers sends the intrepid mouse Miss Bianca and her reluctant companion Bernard to the rescue of the orphan girl Penny. Among the highlights of the film are Ollie Johnston’s animation of Rufus, an aged cat who was essentially a self-caricature, and Milt Kahl’s wonderfully flamboyant villainess, Madame Medusa. More than three decades after its release, it’s still easy to see why The Rescuers scored a hit with audiences and critics, outdrawing Star Wars in France and Germany. The Rescuers Down Under (1990) is the forgotten film of the Disney renaissance of the ’80s and ’90s. The first sequel in the studio’s history and the first non-musical since Victory Through Air Power in 1943, Down Under brought back Eva Gabor and Bob Newhart as the voices of Bianca and Bernard. The dauntless agents of the mouse Rescue Aid Society go to Australia to help Cody, a boy who’s been kidnapped while trying to save a giant eagle from a wildlife poacher. The film includes some thrilling aerial sequences of Cody and the eagle, inspired by the work of Hayao Miyazaki. But Cody isn’t a terribly interesting character and much of the story feels by-the-numbers. Although The Rescuers Down Under was eclipsed by The Little Mermaid and Beauty and the Beast, which came before and after it, no fan of Disney animation will want to miss this delightful double bill. The color on the Blu-ray transfer is somewhat oversaturated, especially on the older film, so technically minded viewers will want to adjust their TVs accordingly. (Rated G: cartoon violence, some scary situations, alcohol use) –Charles Solomon 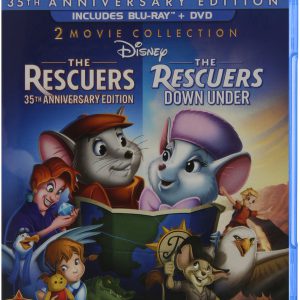 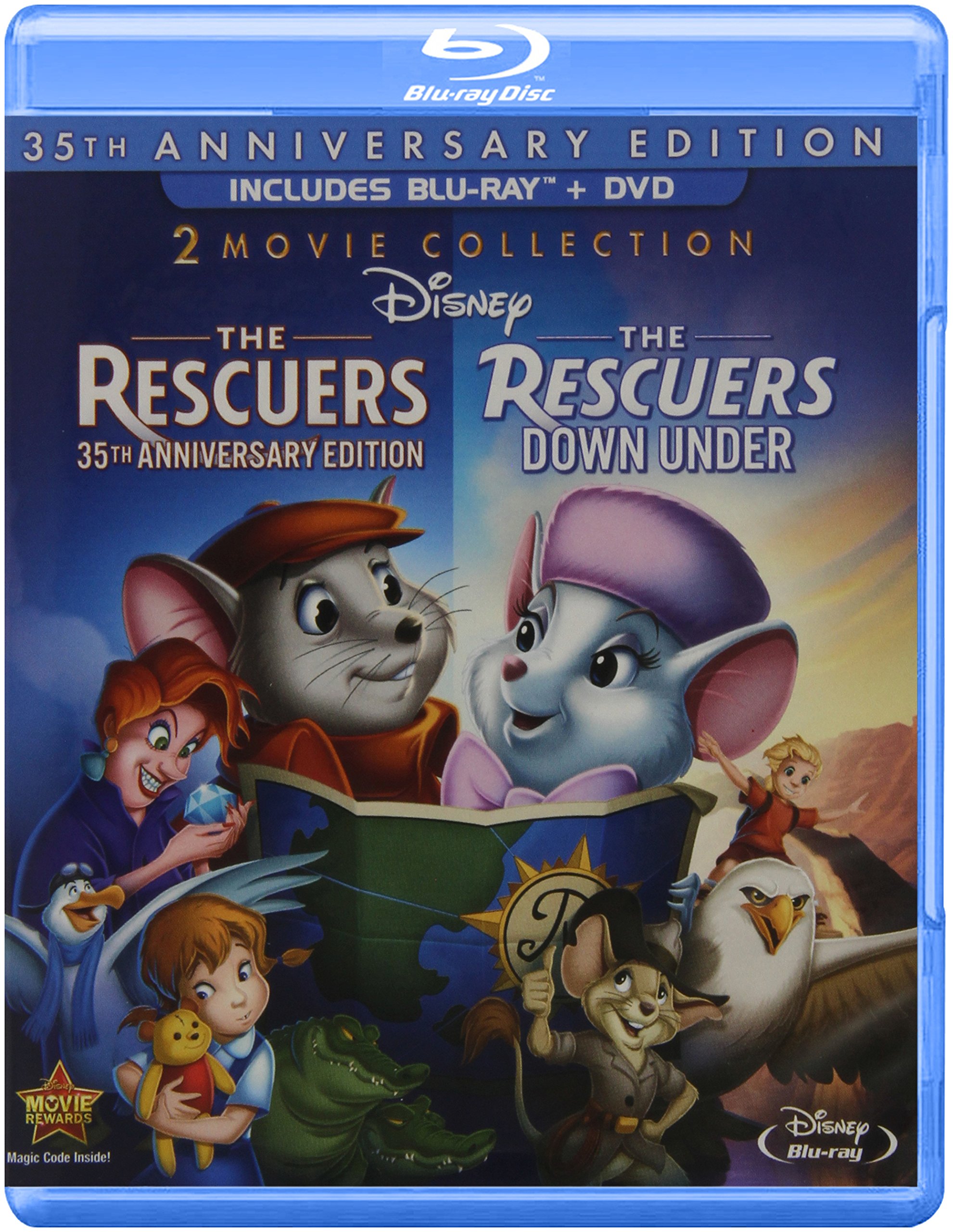